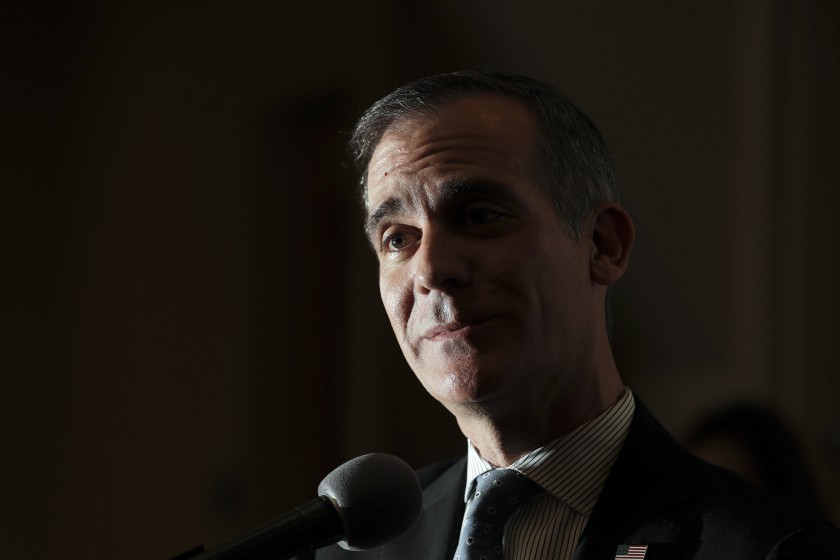 Taking the next step in months of negotiations over ways to combat L.A.’s homelessness crisis, Mayor Eric Garcetti and U.S. Housing and Urban Development Secretary Ben Carson on Thursday announced the formation of a joint working group.

Although much about the collaboration remains unknown, the mayor and secretary said their staffs would be working together to identify red tape and other impediments to getting people off the streets and housed quickly.

As recently as last month, Garcetti and Carson said they were close to a deal that would allow Los Angeles to receive more federal resources, including money and land on which to build shelters. The mayor warned at the time that “there’s no cavalry coming from Washington.”

On Thursday, however, Garcetti was more optimistic. He and Carson spoke with The Times at the Getty House, hours after both men addressed an event on homelessness at USC’s Schwarzenegger Institute for State and Global Policy.

“In the next, I would say, two to three weeks, we will have an idea of what federal land will work for us to put city funds, hopefully some state funds, and federal funds together with county programs, to essentially open more beds,” Garcetti said alongside Carson at the mayor’s official residence.

Garcetti said he expected L.A. County officials would also participate in whatever deal emerged from the negotiations and working group. 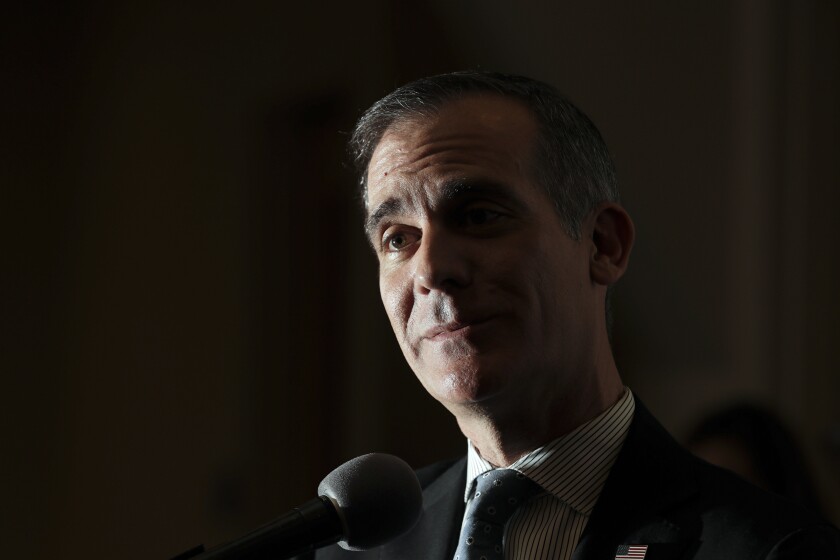 L.A. Mayor Eric Garcetti has seemed optimistic about the city’s collaboration with the federal government on reducing homelessness.

Both Carson and Garcetti declined to say how large the potential injection of funding could be or how many beds might open in new shelters. Carson said some of the federal aid might come in the form of medical services, but he declined to be more specific.

“We’re examining pieces of property,” Garcetti said. “We can’t discuss it yet, but we’re talking about which resources we would both bring to the table to help build things. But we’ve all recognized all this could slow down to a snail’s pace if we have regulatory barriers.”

Slashing regulations has been a theme of Carson’s in recent days as he toured Southern California, most recently in San Diego and Riverside. He visits Long Beach on Friday. On Thursday morning, he told a room of state and local politicians that there was no place for the NIMBYism that often blocks development of affordable housing in California, and he decried burdensome regulations that make it hard to build.

Still, Carson offered few concrete proposals about how the city, county and federal government might better grapple with homelessness or the affordable housing crisis. He did, however, say his agency would soon be rolling out a plan asking churches and other religious institutions across the country to “adopt” a homeless person, with the goal of getting people off the streets.

“Can you imagine what the impact of that will be?” he said. “Pretty much wipe out homelessness.”

After the speech, he boarded a large bus and headed to the neighborhood of Crenshaw in South L.A., where he toured a recently completed accessory dwelling unit — apartments built from converted garages or standalone properties in the backyards of single-family homes. It was, in fact, the same unit that Gov. Gavin Newsom visited in the fall to sign several housing bills aimed at easing the state’s housing crisis by expediting the building of such homes. Even as local and state officials have taken steps to reduce regulations and make these apartments easier to build, federal officials, including President Trump, have been critical of the state’s housing policies. Carson has been no exception.

On Thursday, he said California and other states needed to take a hard look at changing more policies, such as zoning neighborhoods for single-family homes only, because they are vestiges of another time when housing was ample.

“That might’ve been appropriate 50 years ago or a hundred years ago, but really it is not accommodating what’s going on today,” he told The Times, somewhat contradicting statements he made during his USC speech, in which he questioned the value of putting apartments in single-family neighborhoods. The federal government has limited authority over local zoning practices.

Carson declined to say whether single-family zoning should be done away with entirely, saying, “I’d like to see it altered in a way that we can accommodate a lot of the tremendous innovation that has been made.”

Trump, in addition to criticizing the state’s housing policies, has repeatedly castigated cities for not being able to reduce swelling homeless populations. The White House recently released its proposed spending plan for the next fiscal year, calling for cuts of $8.6 billion to the Department of Housing and Urban Development’s budget, which would amount to 15% of last year’s budget.

Housing advocates have criticized the proposed cut, saying it would mean tens of thousands of Americans would lose rental assistance and be forced from their homes. The National Low Income Housing Coalition estimates that 160,000 families could be threatened by reductions to the federal housing voucher program.

Carson on Thursday dismissed the budget plan as just a negotiating position and said no one would be forced out of their home.

“It’s not going to happen. It never does,” he said. “But you have to start the negotiations at a place, and you know, the president wants to make clear that we can’t just keep ignoring the federal debt.”

Still, the mixed messages have made some elected officials and homeless advocates wary of the federal government’s overtures to Garcetti and Los Angeles.

“I think it’s clear that [Carson] wants to work with California,” said Sacramento Mayor Darrell Steinberg, co-chair of the governor’s task force on homelessness. “I just don’t know and it’s right to be skeptical about whether or not anything associated with this administration and Trump will actually be constructive or helpful.”

Newsom says he has been trying to get help from the Trump administration in a quieter manner, even as Garcetti’s negotiations with Carson have progressed more publicly. During an appearance on “Late Night with Seth Meyers,” Newsom said he met with federal officials this week in Washington to see whether they’d be willing to support California’s efforts.

“This is a humanitarian crisis, and we have got to turn it around,” the governor said. 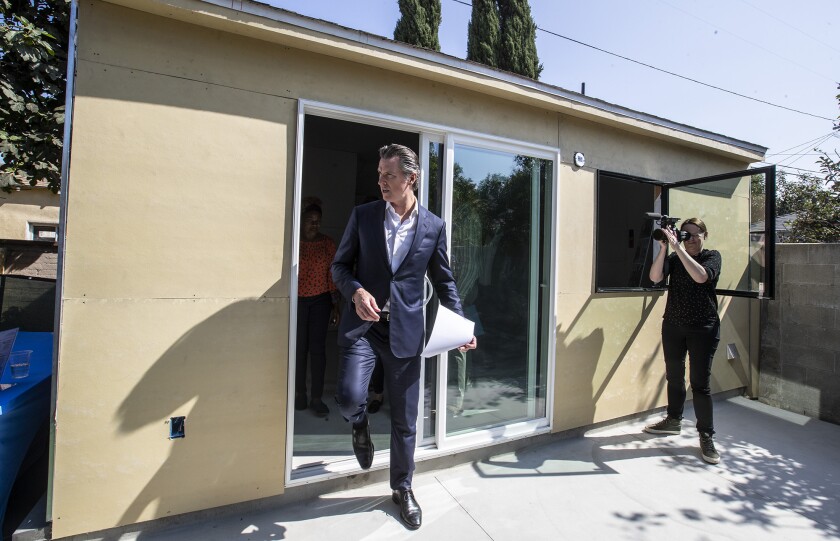 Carson on Thursday said solving the problem will take working across political parties and multiple levels of government.

“We have agreed that we need to stop talking about homelessness and do something about it and recognize that that’s going to require cooperation,” he said. “It’s too big of a problem for anybody to handle by themselves.”

Garcetti, speaking at USC, seemed aware of the political optics. He joked about what he called “a strange buddy movie” of his working with Carson. But he said he was “surprised” how well they had been working together, despite their profound political and ideological differences.

“Instead of punching back at the president, which I’m happy to do when I need to, I said this is more important than partisanship,” Garcetti said.