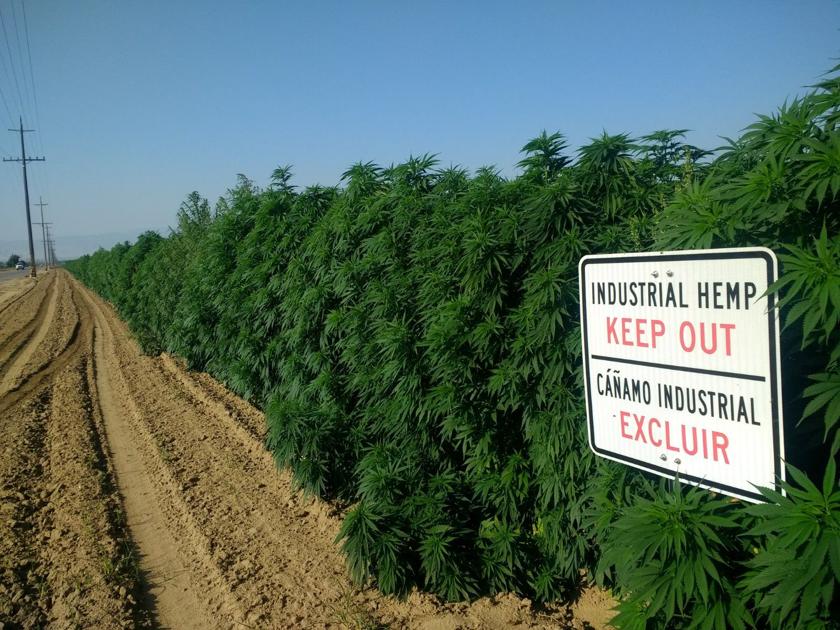 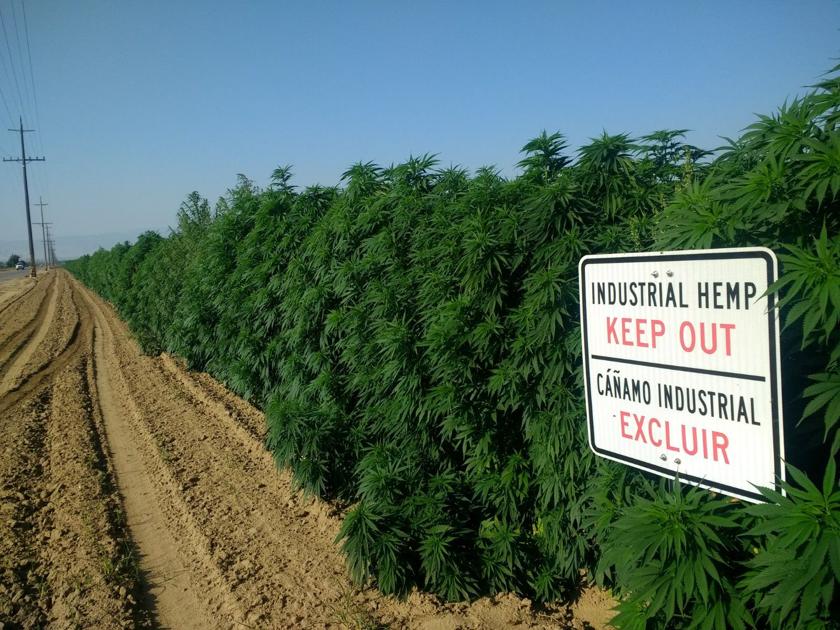 People driving through the Arvin area last fall must have thought they were hallucinating.

There on the west side of South Edison Road, across the street from an almond orchard and a stone’s throw from a grape vineyard, stood a thick, dark-green cannabis grove more than 6 feet tall.

The mere sight of the unfenced field was enough to attract thieves, not to mention a visit by concerned security personnel from nearby Arvin High School. But marijuana this was not.

Hemp — 140 acres’ worth that has since been expanded to 311 acres on the same property — is Kern’s newest cash crop. The formerly illegal plant prized for its tough, stringy fiber is now grown in the county to produce the popular medicinal oil called CBD, or cannabidiol.

Since being cultivated for research purposes last fall in Kern, the plant may now be grown legally in the county for any use, so long as it’s properly registered and contains no more than a very small concentration of marijuana’s psychoactive ingredient, just to make sure people don’t use it to get high.

The fact that hemp now covers more than 3,000 acres in Kern is an ironic twist for a county that has all but outlawed the production and sale of marijuana itself. Last month Kern became the first in California to register the crop for non-research purposes.

One reason for the embrace: Local officials say growing hemp could end up deterring pot growers from setting up illegal groves nearby because cross-pollination could diminish their own product’s potency.

Concerns about marijuana don’t matter much at Stenderup Ag Partners, the farmers growing hemp along South Edison. It produces the crop for a third-party, Apothio LLC, that owns a converted potato facility in Bakersfield where hemp is processed.

Third-generation farmer Andy C. Stenderup, the farming company’s co-owner, said hemp is just another crop to him, one of seven crops he grows.

“We’re just looking for an opportunity to make a couple dollars,” he said. “It’s hard to find profitable crops for a small farmer.”

Before planting it he went to the county ag commissioner, the Board of Supervisors and the sheriff’s department to make sure he wouldn’t end up in jail. He has also received visits from non-county government officials who drove up in black SUVs — just like in the movies, he said — “but they don’t care anymore.”

A narcotics lieutenant with the sheriff’s department did not respond to a request for comment Friday. Neither did the county supervisor representing the district that includes Stenderup’s property, David Couch. Apothio could not be reached for comment.

Kern’s first legal hemp since the plant was outlawed in the 1930s was grown last fall, when a total of 13 parties were permitted to produce it on a strictly research basis, county Agricultural Commissioner Glenn Fankhauser said.

He told farmers to put up signs stating the crop was industrial hemp, required that all hemp seeds come from a certified source and imposed a rule that any plant would be destroyed if it contained more than about a third of 1 percent tetrahydrocannabinol, or THC, marijuana’s psychoactive ingredient.

Not until about a month ago did the state allow commercial production, leading Fankhauser to issue permits to five parties; two additional permits are pending. These growers, almost all of whom grow in the Arvin area, must abide by the same rules as the research-based growers did.

Hemp grown locally that exceeds the prescribed THC threshold must be destroyed; it cannot be simply reclassified as commercial pot, Fankhauser said.

That’s not expected to become a problem, he added, because the two types of cannabis strains are not compatible. That goes back to the county’s strategy for allowing hemp production as a way of keeping out marijuana: Cross-pollination makes hemp too potent, just as it makes pot weaker.

The county has received multiple expressions of interests from “big money” companies, consultants and lawyers hoping to win permits to produce hemp in Kern, Fankhauser said. But because those entities tend to have little or no experience in agriculture, he said, the permits have generally gone to local farmers who then sell to processers and marketers, as has been the case with Stenderup and Apothio.

Kern’s top planner, Lorelei Oviatt, noted that hemp may be grown in unincorporated parts of the county zoned for exclusive or limited agriculture, as long as the farmer has a permit from Fankhauser’s office.

Processing the plant into oil requires a separate permit from the county planning department. There are special development standards for such facilities, Oviatt said, adding that such activity is also limited to agricultural areas. Turning hemp into a lotion or other non-oil delivery product can only be done in property zoned for commercial or industrial uses, and it requires an appropriate land-use permit.

Stenderup, recounting the repeated thefts he experienced when people started noticing his hemp field last fall, said outsider interest has died down since then. He suspects the “wow factor” will continue to decline.

“In two years it’ll be just like (growing) carrots,” he said.