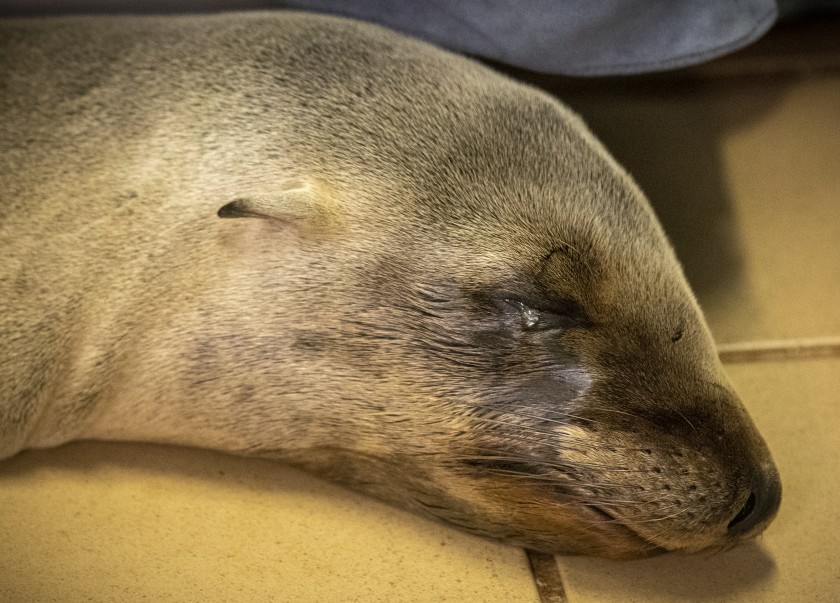 A menacing blob of heat bubbling up in the Pacific Ocean has marine mammal rescuers on edge and gearing up for what could be an exceptionally active year.

The Pacific Marine Mammal Center in Laguna Beach has rescued four baby sea lions since November, an unusually high number so early in the season. The center usually fields calls about stranded pups in January or February.

Officials think “the blob” developing in the Pacific Ocean is to blame for the increased number of strandings, said Krysta Higuchi, a spokeswoman for the rescue center. What’s worse, the weather pattern may grow, creating the same oceanic heat wave that developed between 2014 and 2015 and for years caused thousands of sea lions to become stranded along California’s coast.

The threat comes after an already active year, with 188 sea lion rescues so far in 2019 compared with an average of 150, Higuchi said.

“During what’s become an abbreviated ‘off-season,’ our animal care team has been purposefully preparing for a potentially dismal year for marine mammal strandings,” marine center Chief Executive Peter Chang said in a statement. “We are hoping for the best, but planning for the worst.” Yoda, a 5-month-old California sea lion, who was rescued in distress from the Dana Point Harbor jetty, rests at the Pacific Marine Mammal Center in Laguna Beach.

Following the 2014 oceanic heat wave, which raised sea temperatures seven degrees above normal, researchers documented the largest harmful algae bloom in the West Coast, which shut down crabbing and clamming for months, according to the National Oceanic and Atmospheric Administration.

“Thousands and thousands” of emaciated marine mammals became stranded on the coast, and the effects lasted far longer than “the blob” itself, Higuchi said.

The new weather pattern — officially called the Northeast Pacific Marine Heat Wave of 2019 — has developed over the last few months as a result of a high-pressure ridge that dampened winds and contributed to ocean warming. Researchers say the event is on its way to becoming as strong as the last blob and is already one of the most significant recorded.

The effects could be as devastating to the ecosystem as the 2014 heat wave, but there is a chance the oceanic event is temporary.

“It looks bad, but it could also go away pretty quickly if the unusually persistent weather patterns that caused it change,” Nate Mantua, a research scientist at the Southwest Fisheries Science Center, said in a NOAA news release.

The Pacific Marine Mammal Center isn’t taking any chances. The organization is collecting funds to increase its research, supplies, volunteers and medical equipment, Higuchi said, with $17,000 raised since Tuesday.

The four sea lions temporarily housed at the center were rescued in the last three weeks. The pups, which are all about 5 months old, are malnourished, dehydrated and much too young to be separated from their mothers, Higuchi said.

The day before Thanksgiving, ahead of a major storm, the center received reports throughout the day of a stranded baby sea lion seen shivering along the shore in Dana Point. The scared pup dodged in and out of the ocean, making it hard for rescuers to help him. 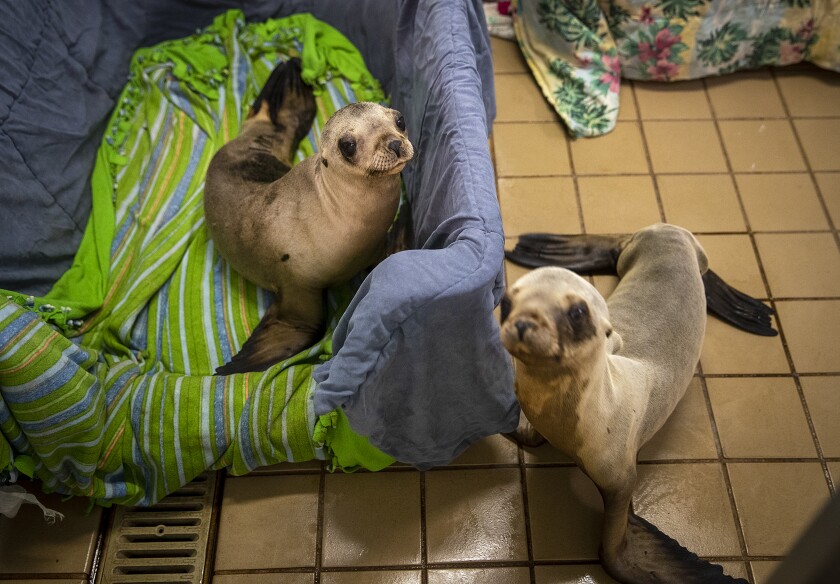 Eventually, the scrawny sea creature retreated to a jetty, allowing rescuers to pick him up. As Higuchi held him in her arms, she could feel how small and malnourished he was. He weighed only 31 pounds instead of the typical 50 for his age.

The latest rescue, Leia, was found beneath the Newport Beach Pier after becoming entangled in fishing gear. She had to be sedated so rescuers could remove fishing line from her mouth and one of her fins, Higuchi said.

Yoda and Leia are still being tube-fed, while the two other rescues, named Kam and Clint, have improved enough to eat fish from a bowl. The sea lions will be monitored before they’re returned to the ocean.