New York Giants’ sixth-round draft pick Corey Ballentine posted an emotional tribute Monday to his former Washburn University football teammate who was killed over the weekend when they were gunned down after leaving a party in Kansas.

“God gives his toughest battles to his strongest soldiers. I love you forever,” Ballentine said in a tribute to Dwane Simmons, a defensive back who was entering his senior year at the university.

Ballentine and Simmons were out celebrating the 23-year-old cornerback being selected as the 180th overall pick in the 2019 NFL Draft on Saturday. The former teammates left the party about 12:45 a.m. Sunday near the school’s campus in Topeka and were stopped by two to four men asking “if they had a smoke,” Simmons’ father, Navarro Simmons, told FOX4KC.

“Some guys rolled up and asked if they had some smoke or something else for sale,” Simmons said. “Dwane and Corey said ‘no’ and they just drove off and came back around and opened fire. And killed Dwane, and we’re just left in many broken pieces.” 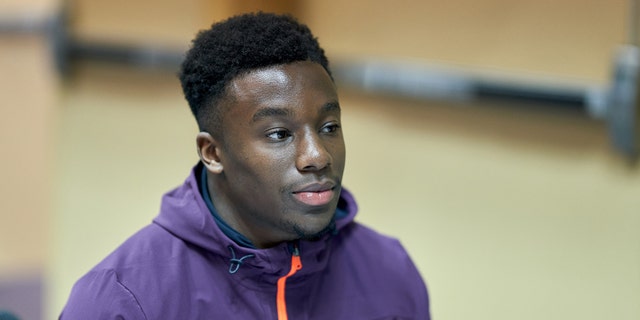 As for his future in the NFL, Giants general manager Dave Gettleman told SiriusXM NFL radio Monday that Ballentine — who reportedly has been released from the hospital — was expected to join the team for its minicamp this weekend.

“He’s a really bright kid and he’s a great kid,” Gettleman said. “What happened is tragic and unfortunate. That’s his best friend he was with. We spoke to him on Sunday. He’s coming along fine. He’ll be here Thursday for the minicamp this weekend.”

Topeka police have released few details on the shooting, but said they were questioning more than 20 potential witnesses Monday in hopes of catching the killer. Ballentine was also asked about the incident, but authorities said they intend to conduct a longer interview.

Dwane Simmons’ family urged anyone with information on the shooting to contact police.

“If you hear anything please speak up. Please go to the authorities. Dwane deserves justice,” Navarro Simmons told FOX4KC on Sunday. 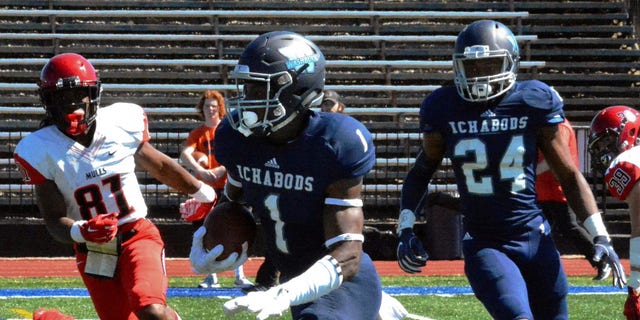 Ballentine was picked by the Giants in the sixth round of the NFL draft Saturday. (AP)

Ballentine was the sixth Washburn University football player to be drafted and the first since 2008, when Cary Williams was selected by the Tennessee Titans, the university said. Ballentine appeared in 46 games and won the 2018 Cliff Harris Award for the small college defensive player of the year.

He was also the first Washburn player to be selected for the 2019 Reese’s Senior Bowl.

The Giants said in an earlier statement they were aware of the “tragic situation” and offered their condolences to the Simmons family.

The Associated Press contributed to this report. 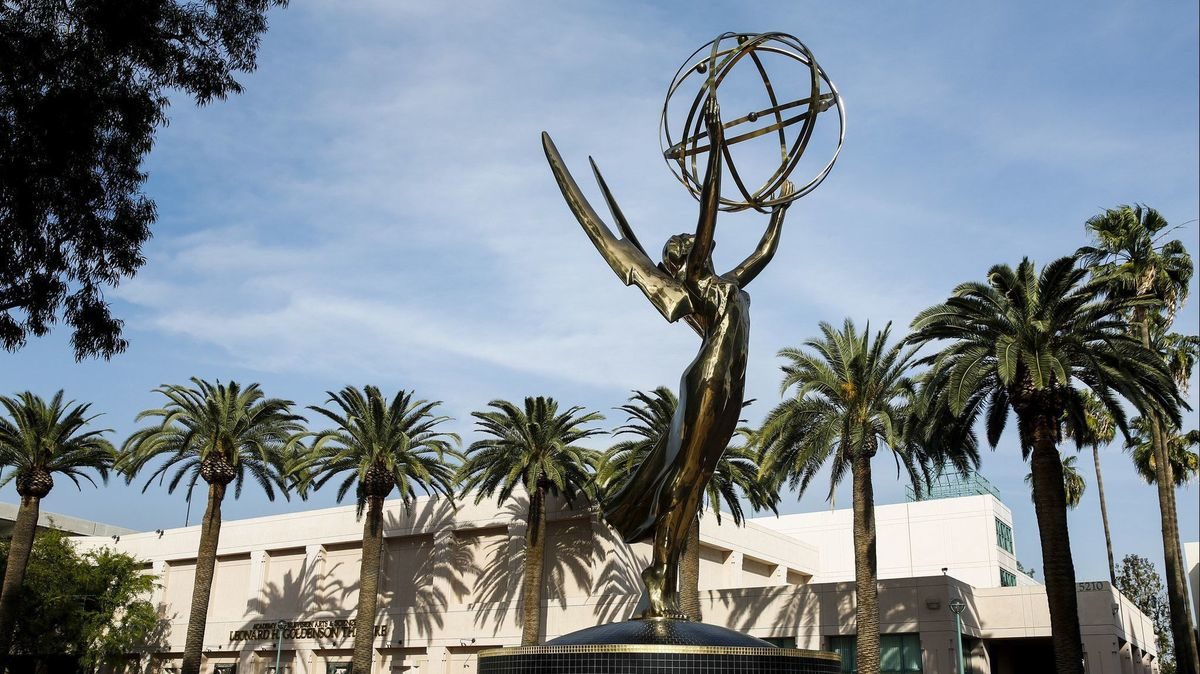 Check back every week to see which new guests are on tap for our Emmy Contenders live chat series, and catch up with last year’s conversations with Claire Danes, Sarah Silverman, Brian Tyree Henry, Sarah Paulson, Neil Patrick Harris and many more below. 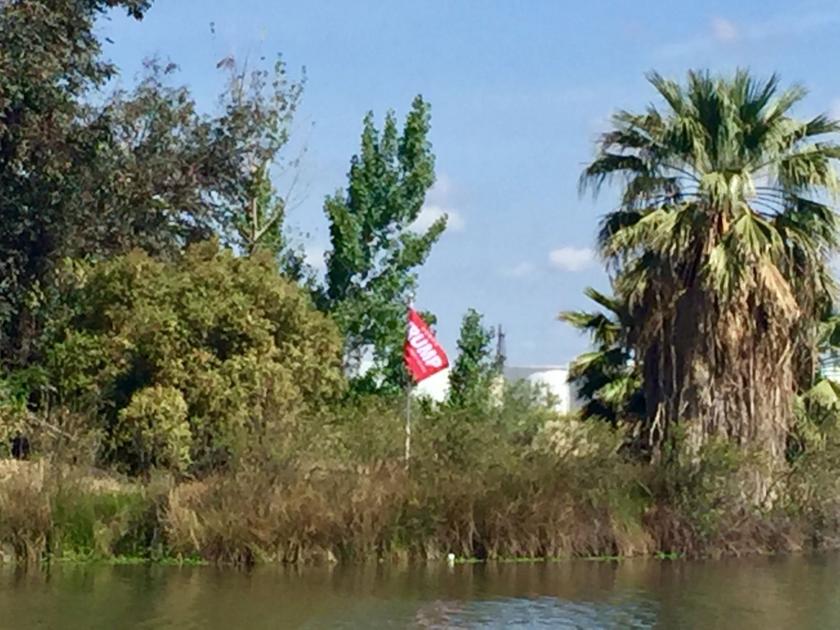 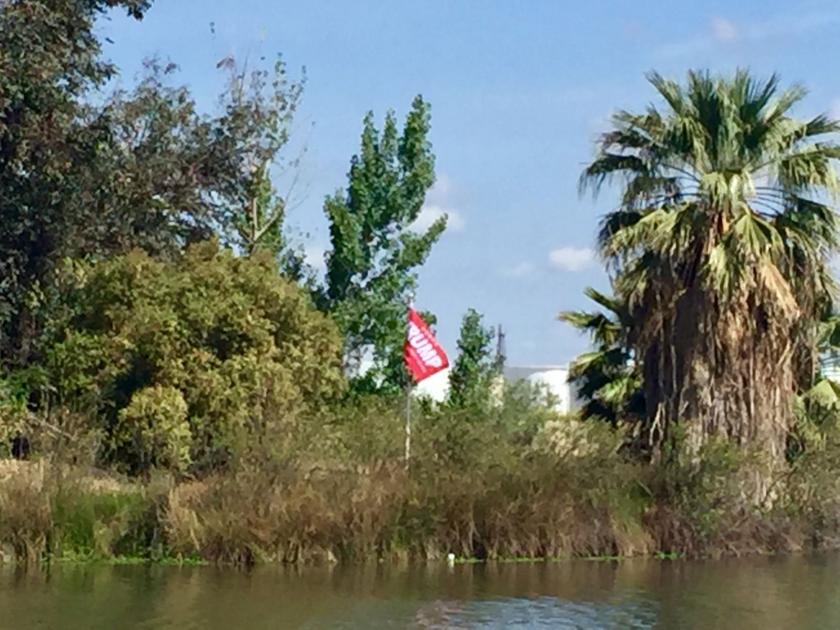 A flag with President Donald Trump insignia has been planted on an island at Truxtun Lake.

It’s unclear who planted the flag and when the event occurred.

Calls to the city Water Resources and Code Enforcement departments were not immediately returned.

This story will be updated. 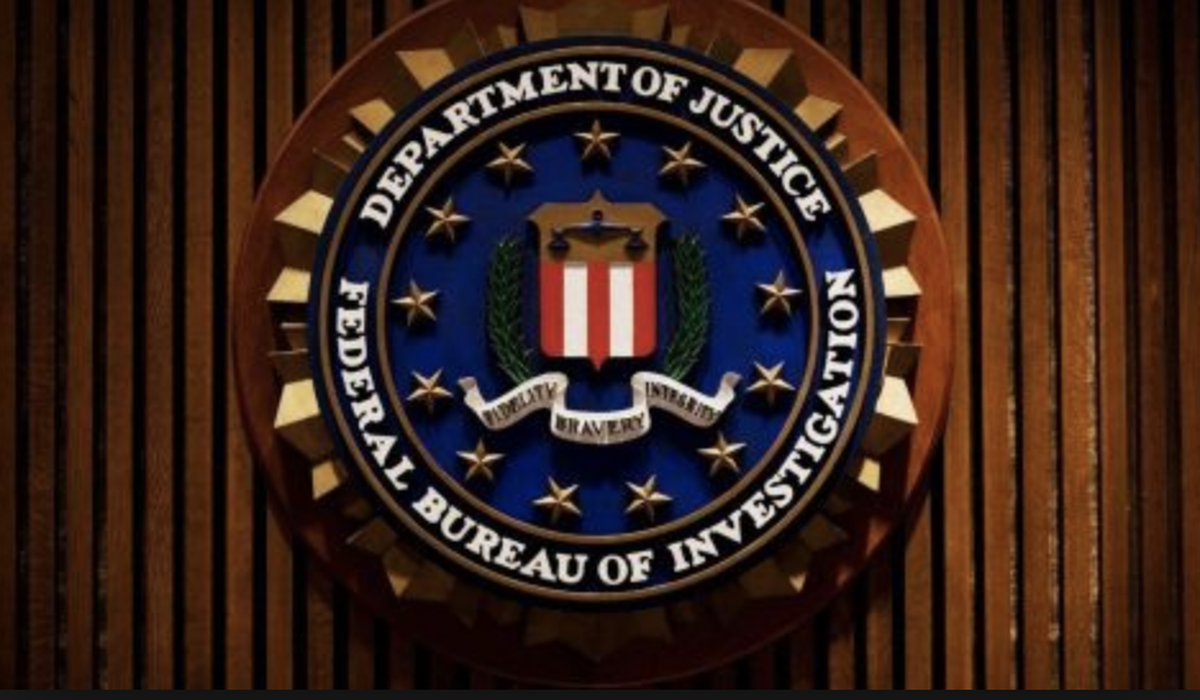 In 2015, Syed Rizwan Farook is wife, Tashfeen Malik, entered a holiday gathering for county employees at the Inland Regional Center in San Bernardino and, using the rifles Marquez had bought and never retrieved, opened fire. Fourteen people were killed and 22 injured. 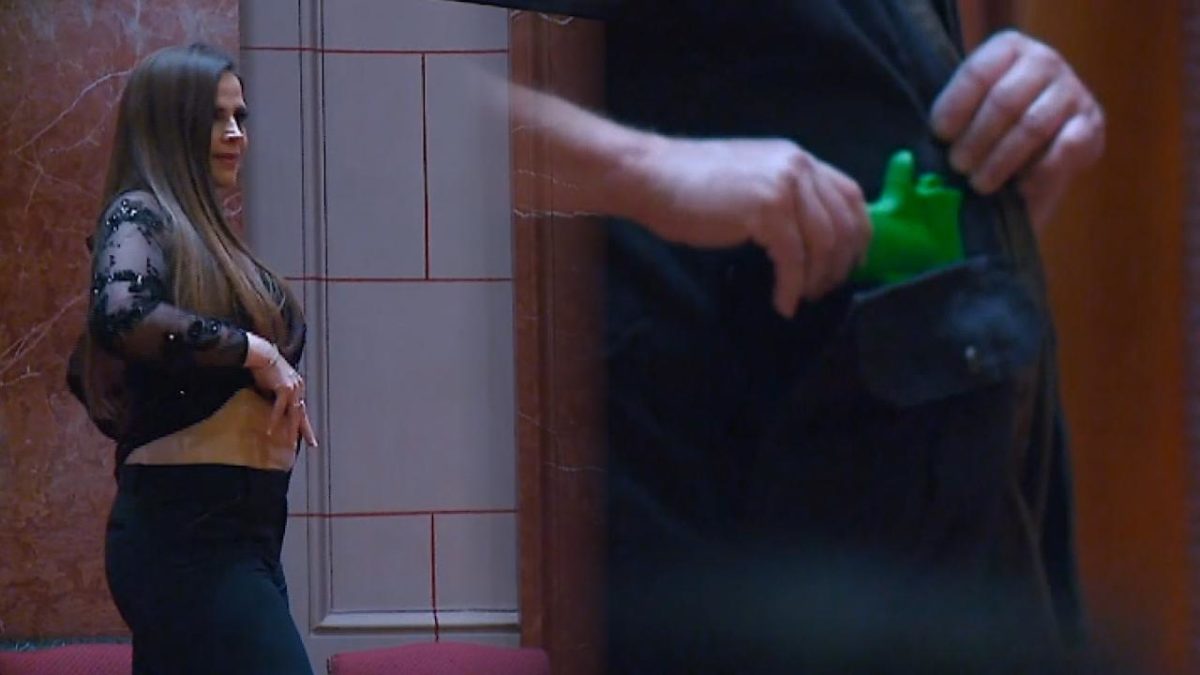 Models took the stage at the National Rifle Association convention in Indianapolis for a women’s concealed carry fashion show. Women at the Indiana War Memorial showed off bags and clothes that would conceal a gun in a safe and fashion-forward way.

Women graced the catwalk in Indiana on Saturday to show off their most stylish way to conceal their firearms.

Models took the stage at the National Rifle Association convention in Indianapolis for a women’s concealed carry fashion show. Women at the Indiana War Memorial showed off bags and clothes that would conceal a gun in a safe and fashion-forward way. They demonstrated how a standard purse could transform into a concealed carry accessory within seconds.

JOHN LOTT: NRA TURMOIL IS NOT A THREAT TO SECOND AMENDMENT BUT THIS COULD DO REAL HARM

“There’s an ‘a-ha’ moment, and a very empowering moment, when you can handle a firearm. It removes all of the fear,” Taylor said. “When I got into concealed carry six years ago, I couldn’t find anything safe or practical.”

Dawn Hillyer, who founded the company Hiding Hilda, said she began carrying a pistol, named Hilda, after a traumatic experience where a man stalked her five years. She said she struggled to hide the weapon.

“It’s very uncomfortable when you first start concealing. You feel like everybody knows you have a firearm,” Hillyer said.

The company founder said although gun show attendance has overall declined, there are more women obtaining a weapon for protection.

One late night in March, Cheryl Claypool was attempting to drive onto the Westside Parkway at Allen Road on her way home when she hit a roadblock.

About 50 cars were stopped on the parkway and blocked the whole freeway, Claypool said, with a few taking off at a time in what appeared to be illegal street racing across the parkway. Claypool attempted to get around the crowd, but initially couldn’t get off the freeway.

“I stayed to the right-hand shoulder and tried to get off at Calloway (Drive), but I couldn’t because they were blocking that too,” she said. “I ended up having to weave my way down to Truxtun (Avenue) to get off. You can’t go anywhere until they move. You have to wait for them to do their thing.”

Claypool said she’s had some run-ins with street racers before, although usually smaller groups.

“It definitely seems like it’s getting worse,” she said. “They know there’s not really much enforcement on that freeway and that they can get away with it. I’m all for having a good time, but it gets dangerous when there are 40 or 50 cars involved.”

The department said it has received a total of 41 racing-related complaints at the parkway since 2017.

While the department has seen more complaints this year, Public Information Officer Nathan McCauley said they may not necessarily mean that street racing is getting worse.

“It could be that people are becoming more aware of (street racing) and are reporting it more,” he said.

McCauley said BPD takes street racing seriously. While they have not conducted any operations so far this year, he said they have done several in the past in an attempt to clear out racing spots across the city.

“We have sent officers out this year for enforcement but we haven’t done a big-scale operation so far this year. It takes a lot of resources,” he said. “If the situation with the parkway grows and becomes a significant problem, we will try to stop it.”

Even when the department clears out a racing spot, racers will often just move to a different place, McCauley said. This causes the department to play a game of whack-a-mole with the racers.

“Our efforts work to an extent, but it almost always seems like we’re just moving the problem to a different spot,” McCauley said.

Chris Addington, spokesman for the Bakersfield Car Club Council Inc., said his organization does its best to discourage street racing in town.

“Anybody who does that, we ask them not to be affiliated with our organization,” he said. “We have zero tolerance for street racing. It’s totally unacceptable.”

Addington said the council’s strict stance on street racing is intended to help keep people safe, as he said that kind of racing can kill or seriously harm people.

Alternatively, Addington recommends that street racers use raceways in Kern County like the Kern County Raceway Park west of Bakersfield and the Auto Club Fomoso Raceway in McFarland, as they provide a safer way to race.

However, he said many street racers don’t opt to do that because it’s less convenient. Why drive 30 minutes or more to race when you can just find a place to race in Bakersfield?

“They do the parkway because it’s easy to get to and usually not very busy late at night,” he said. “We have to get this under control. BPD just has to hammer down on these people and let them know they’re going to be prosecuted to the full extent of the law. A lot of them don’t understand the consequences of their actions.”

McCauley said the current punishment for street racing can vary depending on various factors. If it’s just a case of simple speeding, he said that would usually warrant a citation. If there is reckless driving or something more serious, that could lead to a misdemeanor arrest.

“It really varies depending on the egregiousness of the individual, how dangerous they’re perceived to be,” he said.

Robert Rodriguez, public information officer for the California Highway Patrol, said his department takes similar enforcement steps regarding street racing, which the department deals with largely in the outlying areas of Bakersfield and the rest of the county.

Typically, Rodriguez said racers are given citations, can have their license suspended and, in some cases, their vehicle will be impounded.

“If someone is resisting an officer or they escalate the situation in some other way, then it usually becomes an arrest,” he said.

Claypool said she understands that street racing isn’t BPD’s highest priority, but believes officers need to be more present on the Westside Parkway, especially at night. Like Addington, she believes stiffer penalties could go a long way in reducing street racing in town.

“BPD is trying hard and I give them kudos, but they can’t be everywhere at once,” she said.

The city said it has no immediate plans to install cameras on the Westside Parkway, in part because jurisdiction of the parkway is expected to be given to Caltrans once it is connected to the Centennial Corridor. 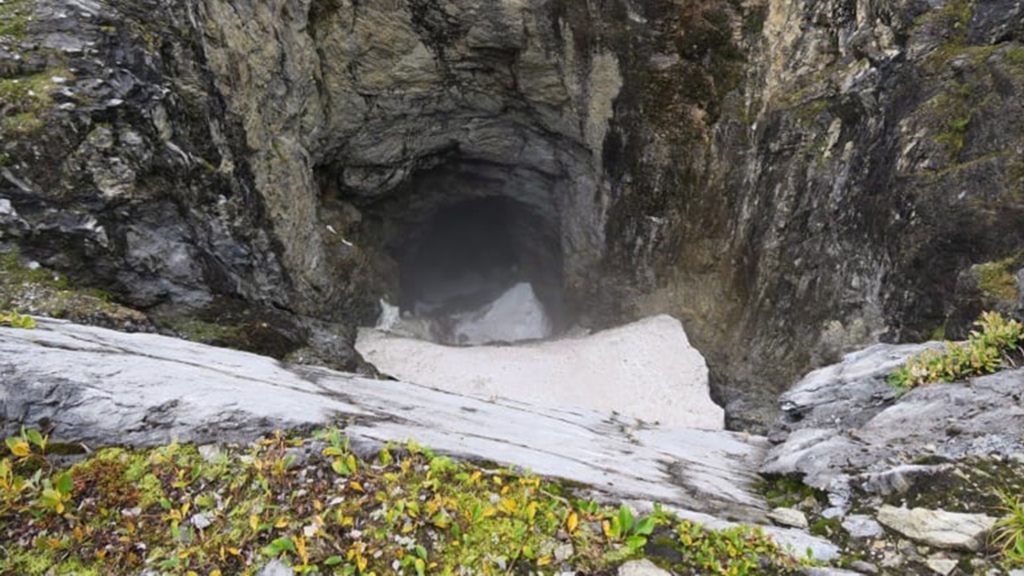 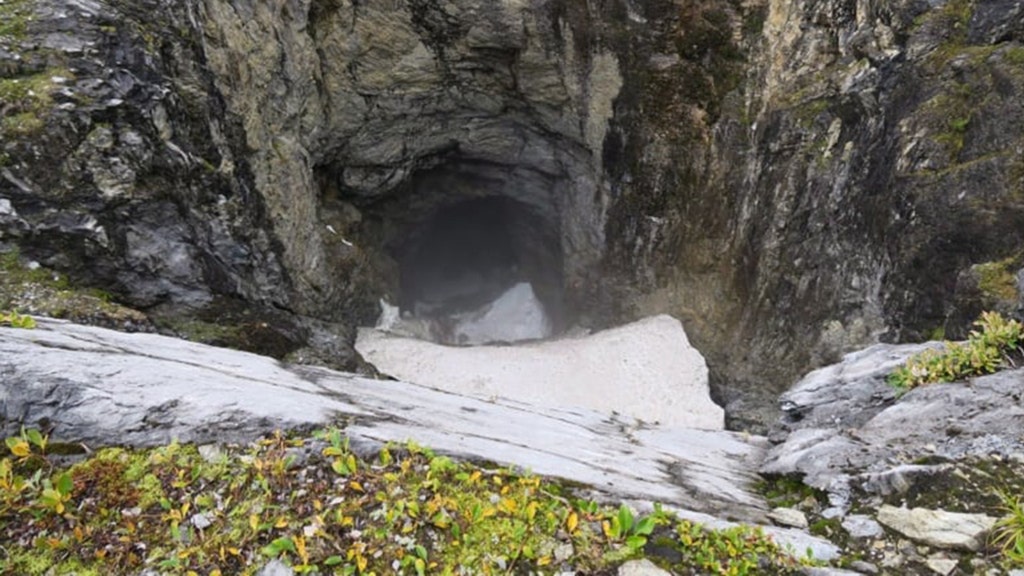 A rescue operation was underway early Sunday in Russell County, Virginia, where five people were believed to be trapped inside a cave.

All five were believed to be OK but unable to get out because the path had become too slippery, WCYB-TV of Bristol, Va., reported.

“Heavy equipment” was being brought to the area for use in the rescue, Jess Powers, an emergency management official for the southwestern Virginia county, told the station.

State-level resources are being brought to the area as well, WJHL-TV in Johnson City, Tenn., reported.

This is a developing story. Check back for updates.